On my album "The Blue Call" are 13 songs that breathe the vibe of the 60s, all of which are about love. The production of the album was incredibly fun for me. Starting with the song lyrics to the instrumentalization have put me back to the time of the early 60s. Now that I hear the finished album, I am amazed at how fresh and groovy the songs sound on "The Blue Call". I thank my family, my friends and my fans for their support and I wish you all a lot of fun listening to "The Blue Call".

As a recording artist I compose and write my own songs, which I then record, mix and distribute on the internet. Through my stage experience and playing and recording in various music bands, I have a very concrete idea of ​​how my finished song should sound. Already when arranging the individual parts of the songs, I have the sound of the entire band in my head. I play or program the individual instruments myself. So, in the "Sound on Sound" recording process, I finally create a playback on which I record the vocals and the backround vocals. My personal goal is to make the finished song sound as authentic as if it had been recorded by an entire band of individual musicians.

Even before I started with the recordings for "The Blue Call", I knew that I wanted to create the sound of the early sixties. For that I had to sit down and research, how the studios at that time recorded and mixed the sound.

A good source were the early Beatles recordings at Abbey Road Studios in London. Fortunately, you can find a lot about the these recordings on the Internet.


Back than the studios had just 2 or 4 track tape machines for the recording and not the digital processing options like we have today. So you had to place the existing microphones perfectly in the room, because the band were recorded live at the same time.

If a musician made a mistake, the whole song had to be recorded again. After the backing tracks were recorded, overdubs of the vocals, the backround vocals and the guitars could be recorded.

During the recording of "The Blue Call" I tried to adapt to the limited possibilities of that time. Here I have made the requirement, not to exceed the number of a maximum of 8 tracks per song. So only one track for the drums, the bass, the rhythm guitar and the lead guitar. I recorded the vocals twice and then mixed them together in one track. That's exactly what I did with the backround vocals.

When recording the individual tracks, I also tried to record them in one take. This is to make the song not too perfect and overproduced but sound authentic. 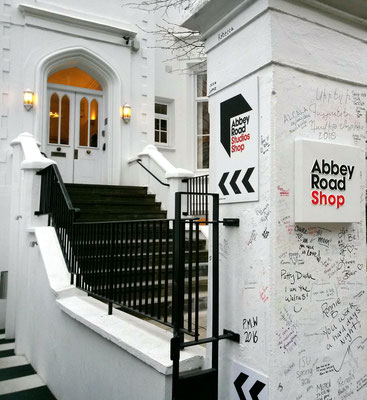 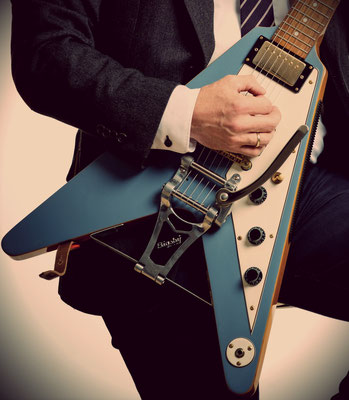 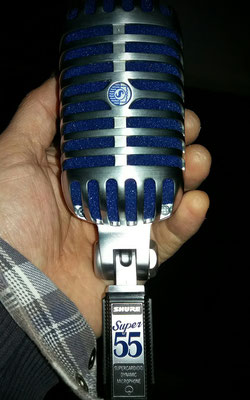 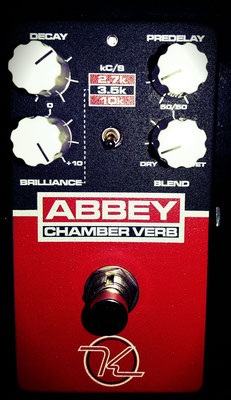 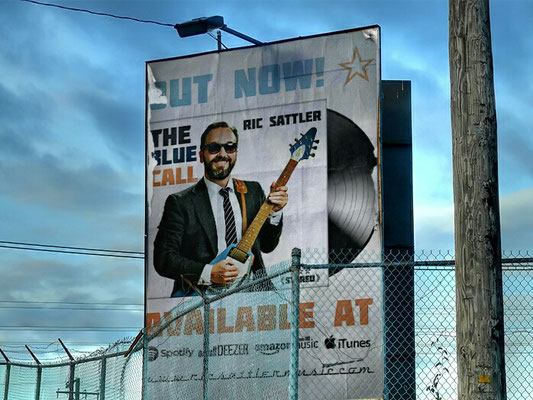 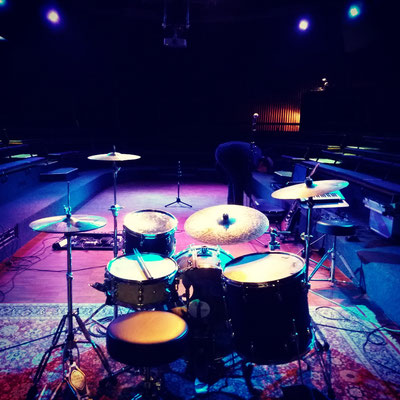 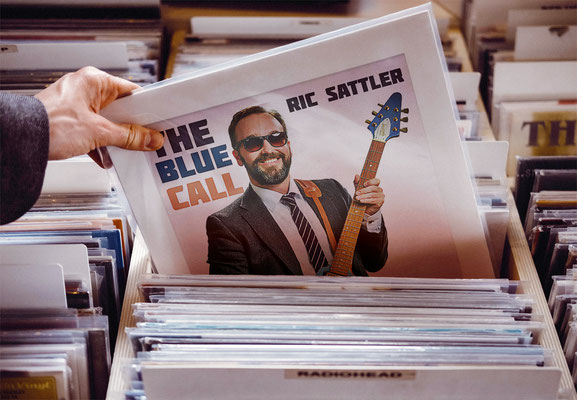 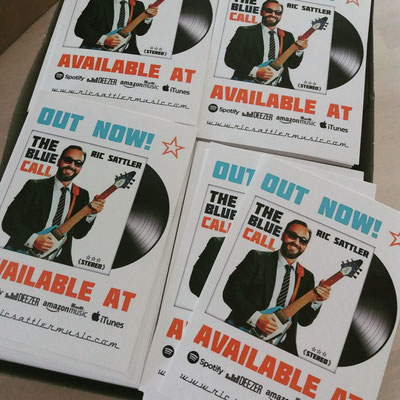 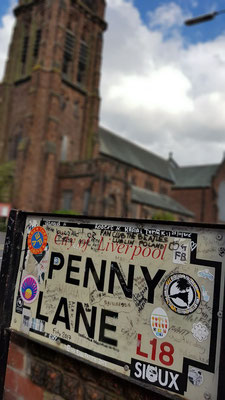 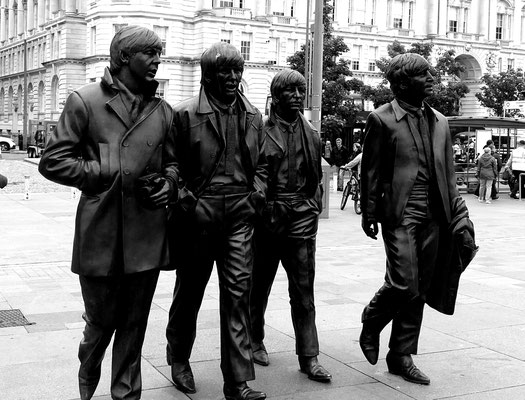 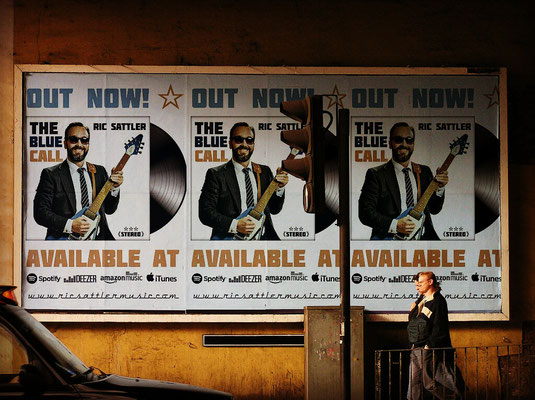 To create the right vintage sound, I recorded the guitars as clean as possible. As a guitar amp, I used a Vox AC30 and a Fender Twin Reverb. On my guitars I put flatwound strings they played back in the 60s. As a rhythm guitar I used a Höfner 459 with mini humbuckers and as a lead guitar a modified Flying V with a twangy TV Jones bridge pickup.

As bass, I used a Höfner Cavern Club shortscale bass. The bass also has flatwound strings on it. As a bass amp, I have used an Ampeg preamp, where I've sent the signal additionally through a tube preamp.

To create an authentic drum sound, I used Toontrack. Toontrack offers a beautiful vintage Drum Set in the style of the legendary Ludwig Keystone. I programmed the midi drum beats and recorded them with only four microphones: Room, Overhead, Snaredrum, Bassdrum.

For the vocal recordings, I used a Shure Super 55 Deluxe Elvis microphone. Actually, it is a live mic for the stage, but it also has a very nice and musical sound when recording in the studio. I sent the signal from the microphone through a tube preamp.

I've already used one effect on the recording: Keeley's Abbey Chamber Verb. It' a recreation of the famous echo chamber at Abbey Road Studios. It's a soft and warm vintage reverb I used both for guitars and vocals. It also has the electronic filters they used in the studio.

A very inspiring trip to Liverpool in june 2017 made me write and record some new songs.

The city breathes a very special musical history. It is the birthplace of the Beatles and the Mersey Beat of the early 60s. Even today, places like the Cavern Club exude a certain aura. Through the trip I have worked intensively with the British beat music.

In my last band (Ramington Flashride) we always played a very hard and heavy music. The lyrics were very thoughtful and rarely dealt with loss, pain and anger.

That's why I've always been looking for a project where I can live my poppy, happy and melodious side. The typical Singer & Songwriter things with acoustic guitar was not so much my thing. With the Liverpool Trip I have finaly found the right Beat for my songs!

At the beginning of the sixties, it was assumed that stereo would never prevail. Therefore, a lot of time and effort was spent on the mono mix. The stereo mix was created as a necessary evil in all fast. Since today everything is heard in stereo and we really only know the stereo mixes, which stand out because of their blatant panning.

For the effects I have also oriented myself to the devices that were available to the recording studios at that time.

In the Abbey Road Studios you can use the REDD consoles. REDD stands for the in-house Record Engineering Development Department. These consoles deliver the classic British sound of the 1960s. A plugin that strongly follows the sound of the former REDD consoles is the Code Red Free Plugin by Shattered Glass Audio. It captures the bold and punchy character, and the warmth of the old all-tube console.

Finally, I use a plugin that simulates a tape machine. This gives the song a warmer sound and sticks the individual instruments together more.